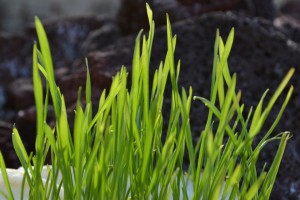 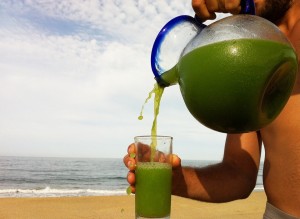 Wheatgrass is a young grass which belongs to the wheat family that has been consumed for thousands of years, especially in the ancient Mesopotamian and Egyptian civilizations for the massive health benefits of wheatgras​s. Wheatgrass is an incredible source of vitamin A, C, phenolic compounds, antioxidants, minerals and most importantly, chlorophyll. It’s great for your heart, your brain, skin and your entire body. Needless to say, a wheatgrass juice shot would pack a monumental nutrient punch considering the fact that it far exceeds the nutritional benefits of many organic vegetables. If you’re a wheatgrass beginner, remember to have your juice within 20 minutes of juicing to prevent the oxidization of vital minerals and nutrients.

Sure, almost all organic vegetables and herbs will contain a good amount of chlorophyll, but research shows that the chlorophyll content in wheatgrass is superior. 70 percent of wheatgrass is chlorophyll. It contains over a hundred minerals required by the human body. When grown in soil, wheatgrass absorbs up to 92 minerals of the 115 found in soil. Live energy source Yes, wheatgrass does increase your energy levels, but that’s not what we are talking about here. Fresh wheatgrass is a food source that is alive with high levels of bio-electricity. This energy is the life force that can trigger potent vibrations in the body. In addition, the powerful nutrients in wheatgrass can help prevent damage to our DNA, protecting us from the effects of cellular breakdown, premature aging and chronic illnesses. Research shows that the life force in fresh juices, especially wheatgrass juice, can help restore the electrical charge between cell walls and capillaries, thus boosting your circulatory and immune system health. Here is the research we’ve found.

It is a nutritionally complete source of food which has shown to sustain and promote growth and development in people. It has that special factor found in grass that has helped continue the lives of herbivores all this time. To explain its nutritional density further, just two ounces of wheatgrass juice are equivalent to 5 pounds of the top organic raw vegetables on this plant. For example, wheatgrass has higher vitamin C levels than oranges and twice as much vitamin A as carrots. In addition, it contains all B complex vitamins, magnesium, calcium, phosphorous, potassium and sodium. Furthermore, wheatgrass consists of all essential amino acids, making it a complete protein source. This makes it an excellent source of protein for vegetarians. 20 percent of the calories in wheatgrass come from its protein. The protein is found in the form of polypeptides which are shorter and simpler chains that can be absorbed and utilized more efficiently by the body. In summary, one ounce of wheatgrass will give you: 120 calories 8 grams of dietary fiber 8 grams of protein 356 percent of the iron RDA 240 percent of the vitamin A RDA 93 percent of the vitamin C RDA 12 percent of the calcium RDA

Wheatgrass helps remove and annihilate all environmental pollutants, harmful chemicals, bacterial waste and toxins in the body thanks to its powerful enzymes. These enzymes help protect the body from common carcinogens such as superoxide disumates, heavy metals and pollutants that are often stored in our bodies. Our bodies are made to be alkaline in nature, however; the modern diet makes the body acidic and sick. Wheatgrass has a high alkalinity, which helps neutralize the harmful acidic environment in the body, improve digestive health and prevent illnesses from occurring.

Wheatgrass has powerful anti-inflammatory properties which help fight inflammation, which is closely linked to most chronic illnesses such as diabetes, osteoarthritis, heart disease and many cancers. Here is the research we’ve found.

Drinking wheatgrass regularly may help you lose weight. This is mainly because it manages your thyroid gland, which has a huge role to play in your weight regulation. In addition, it’s a great source of magnesium. Studies show that lack of magnesium in the diet may be linked to increased belly fat. Wheatgrass is also rich in fiber and protein, which help you feel satiated. The high nutrient level of wheatgrass prevents your body from telling you that you need more food, thereby keeping you away from sugar and fat-laden snacks and treats.

Fatigue has become a fact of life. When you’re fatigued, your body is lacking rest, which weakens your immune system. The high chlorophyll content in wheatgrass helps boost the oxygen supply in your blood, which is transferred to all tissues and organs in your body. This helps your cells regenerate and heal, thus reducing fatigue and its symptoms. Another noteworthy factor regarding wheatgrass is that it’s loaded with iron. Lack of iron in the diet is linked with fatigue and iron-deficiency anaemia, which has symptoms such as lethargy and irritability.

Oxygen is especially vital for your brain, which utilizes 25 percent of your oxygen supply. When your brain functions better, you become more productive and make wiser decisions in an efficient manner.

Menstruation can be tough for many women because of the cramps. The nutrients in wheatgrass, not only help ease pain, but help improve irregular periods as well.

Wheatgrass is chock full of nutrients, especially antioxidants, which fight free radicals in the body. Free radicals are chemical nasties that cause cellular damage, thereby increasing your risk of premature ageing and a long list of chronic illnesses. Having more antioxidants in the diet from organic whole foods is the best way to slow down ageing. Having a shot of wheatgrass juice every day is the most efficient way of doing this.

Wheatgrass juice is a popular drink for detoxifying the liver. It protects the liver from oxidative stress and helps flush out alcohol, drugs and medications. Here is the research we’ve found. 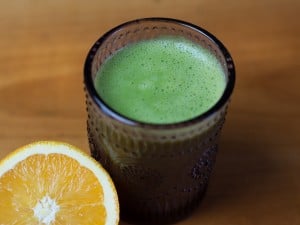 Wheatgrass is a highly potent anti-hypoglycemic agent, which means it’s great for those who have diabetes and even healthier adults who want to keep their blood sugar levels stable.Here is the research we’ve found.

Wheatgrass contains the compound, P4D1, which affects DNA and sperm cells and improves fertility.Here is the research we’ve found.

Topical application of wheatgrass juice has been proven to cleanse the skin as it is easily absorbed by the skin barrier. Drinking wheatgrass juice is also a highly effective skin care regimen as it’s packed with antioxidants and minerals vital for skin health.Here is the research we’ve found.

Since wheatgrass is rich in chlorophyll, it helps deliver more oxygen to your blood and muscles, which comes in handy during strenuous exercise. It keeps you going without having to stop due to muscle fatigue.

Wheatgrass is 100 percent gluten free because the grass is cut right before grains begin to form.

Wheatgrass is a powerful anti-bacterial food which helps alkalize and detoxify blood cells and lymph. The alkalinity of wheatgrass neutralizes the acidic environment that helps bacteria proliferate. Topical application of wheatgrass juice on skin conditions such as eczema and psoriasis has shown some positive results as well.

The US Army exposed a group of guinea pigs to harmful amounts of radiation. They were later fed with chlorophyll-rich vegetables such as broccoli and cabbage and showed half the mortality rate to those that weren’t on a chlorophyll diet.

Juicing is the best way to obtain a higher amount and variety of vegetables in a fast and efficient manner. It also allows the body to absorb all nutrients from the food. ​ 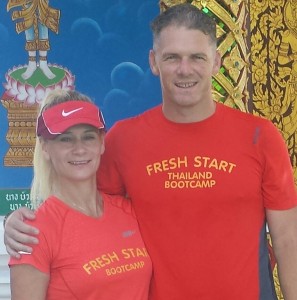 In Summary -Wheatgrass​ is highly nutrient dense, helps prevent diseases, ageing, weight gain and chronic illnesses. With only 120 calories an ounce, it has more vitamin A, B, C and E and minerals than most other organic fruits and vegetables, including citrus, carrots and kale! Furthermore, wheatgrass is a young, bright green grass of the wheat family, which is highly dense in chlorophyll, making it a live energy source that stimulates hundreds of reactions in the body. Drinking wheatgrass juice can also help you reach your weight loss goals faster, eliminate menstruation pain, improve fertility and boost energy levels and brain function. It’s a natural healer and a great skin care regimen that will help you glow!​ Our ​fitness boot camp serves a delicious wheatgrass Pina Colada, made with wheatgrass, pineapple and coconut juice, which together pack a serious nutrient punch. The wheatgrass is grown in the resort’s organic farm, which ensures that you get the optimum benefits of wheatgras​s juice.

The importance of Vitamin D

The Benefits of Meditation and Finding a Style for You

When you think about meditating, what do you expect to get from it? The benefits…

To stay healthy we need to cultivate more healthy habits. We need to build these…